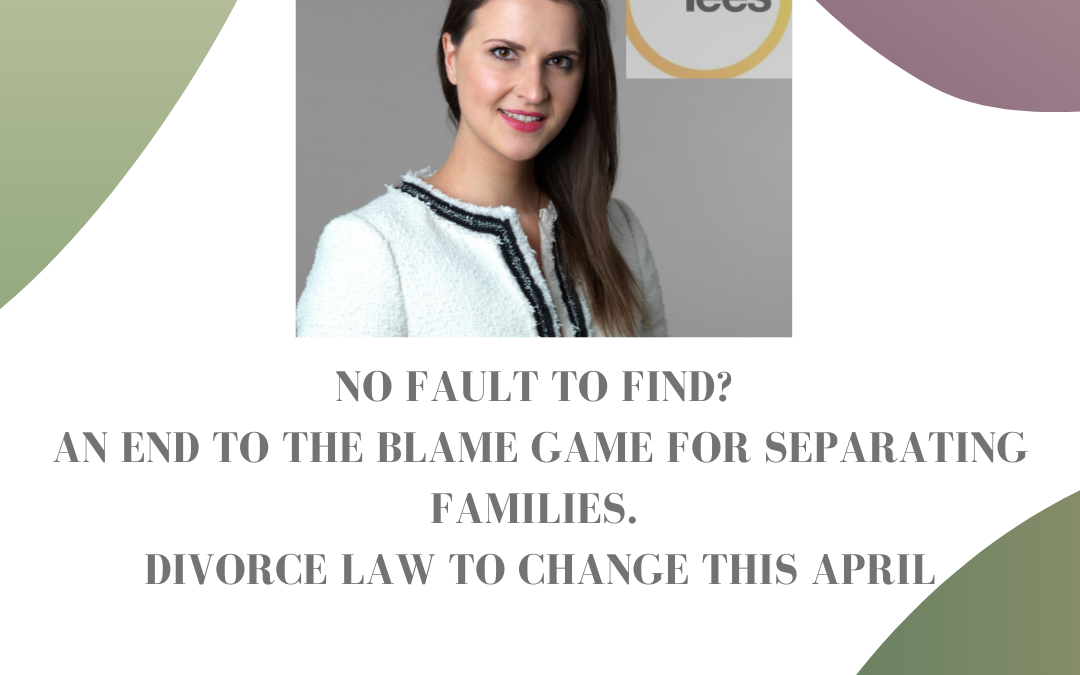 No fault to find? An end to the blame game for separating families
As of this coming April, divorce law will change for the first time since 1973 with the
introduction of the no-fault divorce system. As things currently stand, there is a need to
demonstrate that a marriage has broken down either due to unreasonable behaviour,
adultery, desertion or the fact that the married couple have been living separately for 2
years or more. For many separating couples, these criteria do not apply, which can then lead
to unnecessary stress when going through the divorce process.
One widely publicised case was where an elderly wife was refused divorce because the
Court just didn’t think that the 27 reasons she cited were enough to show that the marriage
had broken down. Many people were shocked that the Court could intervene in someone’s
decision to leave an unhappy marriage, without the Court then having to assess whether
they think their decision was sufficient to obtain a divorce.
Divorce petitions on the basis of behaviour often increase tensions and conflict at a time of
strain for all the family and most importantly, this can have a knock-on impact on co-
parenting children further down the line. Safe to say, the divorce system has been ripe for
an overhaul, and the majority of Family lawyers welcome the advent of no-fault divorce.
Under this new system, there is a no blame element – you simply need to say the marriage
has broken down and the court will take you at your word. This steers divorcing couples
away from the obligation to focus on the “bad parts” of their relationship, which keeps
tensions low and allows parents to concentrate on coparenting their children more
effectively.
That is not to say there is no backing out once the application is made, or that people can
find themselves divorced on a whim – the new law introduces a mandatory ‘period of
reflection’, which will slow the process down by a minimum of 20 weeks so you can both
consider the ramifications of proceeding with the divorce.
This also brings in the ability for you to jointly apply for a divorce, which is ideal for reducing
tensions and promoting constructive and collaborative approaches to separation. An
attitude which, one would hope, will also transpose into the co-parenting arena.
One of the key causes for conflict around child arrangements is a difficult divorce. With the
end of the need to refer to “blame”, this should create a basis upon which separating
parents can work together with focus on how to co-parent and support their children across
two households, and move forward in a more positive way.
Author Francesca Skakel
Family Law Solicitor at Tees Law